What comes after electronics? The future of photonics | NTT DATA

What comes after electronics? The future of photonics presented at the recent NTT R&D Forum

Today, photonic technology in the form of fibre optic cables has become the dominant communications infrastructure for global internet traffic.

This year, on the 16th of May, will mark 60 years to the day since the laser was invented. The origins of the laser can be traced back to the Hughes Research Laboratories in 1960, and it is an invention that transformed research and development in the field of photonics - a technology that was front-and-centre at the recent NTT R&D Forum in Tokyo.

Lasers, which is an acronym for “Light Amplification by Stimulated Emission of Radiation”, produced light with properties that had never been seen before; it could be directed, focused, and propagated in ways that were previously impossible.

Further developments such as the laser diode and the optical amplifier followed in the decades after, and today, photonic technology in the form of fibre optic cables has become the dominant communications infrastructure for global internet traffic. Subsea optical cables now criss-cross the oceans, linking data centres around the world. However, photonics has the potential to be used for more than just telecommunications and data. NTT - along with its partners - is investigating new uses which promise to create a paradigm shift in computing.

At NTT DATA, we imagine a not-too-distant future in which networks are run entirely using photons and photonics. Through optoelectronic integration, photons will run right into a microchip without conversion, and the realisation of this goal would deliver three dramatic benefits for computing:

Take, for example, the data centre industry: it is estimated that data centres currently consume 1 per cent of the global electricity demand. This is already a significant usage, however forecasts suggest this will increase to as much as 10 per cent of global electricity capacity by 2030.This increase is being driven by a corresponding rise in compute-intensive workloads, such as artificial intelligence-based services, crypto-computation of the kind used in Bitcoin and other blockchain solutions, and even quantum computing.

Consider also Moore’s Law. The “law” comes from an observation made in 1965 by Gordon Moore, the co-founder of Intel. He observed that the number of transistors squeezed onto a microchip doubled every two years. The resultant increase in processing power has provided the foundation for computing as we know it. However, the law is forecast to come to an end around 2025 as we reach fundamental physical limits in electronics – physical limits that are characterised by problems around heat and efficiency.

Photonics directly addresses these issues. It provides the efficiency that will underpin a sustainable future with much lower power consumption, as well as a new roadmap for technology that could extend Moore’s Law. 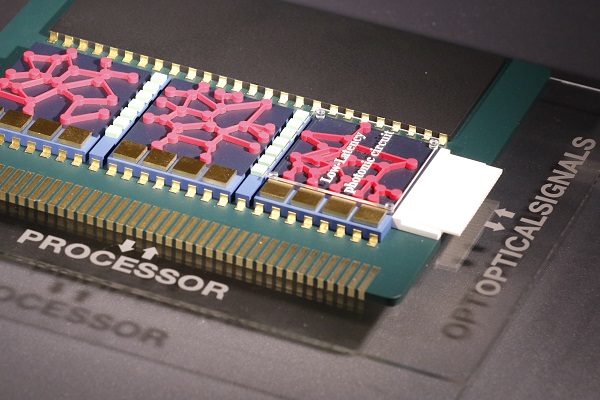 NTT DATA imagines a world in which the benefits of photonics are fully realised – a world driven by an Innovative Optical and Wireless Network, otherwise known as IOWN. It’s a world which has the potential to improve many aspects of life ranging from remote healthcare, disaster prevention, traffic management, autonomous driving, entertainment, and manufacturing. It’s a world that will quickly become a smart world, powered by smart cities, smart mobility and smart manufacturing.

ProcessorAt this year’s R&D Forum a number of services were showcased that can be built on IOWN technology. For instance, NTT DATA Services demonstrated a smart city solution built for the city of Las Vegas to both reactively and proactively respond to real-world scenarios – a solution that other cities are taking great interest in. In media and entertainment, visitors were treated to a preview of the future of entertainment with the IOWN x Entertainment exhibit – technology that seamlessly blended the real world with a virtual one in real-time, all enhanced by AI.

In the future, these additional layers of capability will form the basis for next-generation UI/UX technologies, as well as Digital Twin Computing where the real world is recreated in a virtual environment without restrictions.

Offering services in an IOWN-powered world

If we accept that the forces that are driving the rise in compute-intensive workloads mentioned before, such as AI and quantum computing, are unlikely to diminish, then it is incumbent upon us as a society to find solutions that will allow them to be managed in a sustainable, accessible, and fair way. In this sense, the challenges that the end of Moore’s Law and the like represent have a less-than-obvious ethical dimension – overcoming them is a moral challenge, not simply an economic or technological one.

We are well on our way to a future built on photonics, and NTT DATA is in prime position to build services using IOWN in order to continue to deliver truly innovative technology for our clients, and contribute to solving these challenges in order to work towards what NTT refers to as the ‘harmonious society’.

How can we help you